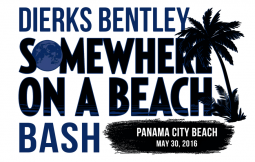 Dierks Bentley announced plans today to celebrate Memorial Day (5/30) with a concert on the beach, inspired by the scorching lead single from his upcoming studio album BLACK (Capitol Records Nashville), out May 27. Bentleys "Somewhere On A Beach Bash will hit Panama City Beach, FLs famed hangout Spinnaker Beach Bar as Bentley's fanclub members and Citi card members will have first access to presale tickets on Tuesday (4/26) at 10:00A CT through Thursday (4/28) at 10:00P CST at DierksSomewhereOnABeachBash.com. General public tickets are available this Friday (4/29) at 10:00A CT. Citi is the official credit card of the event.

Memorial Day is the official kick off to summer, and this will be a great way to celebrate the current single and the new album, said Bentley. Well pack as many people on the beach as we canprobably need to start icing the beer down now!

Fans across the country have already propelled "Somewhere On A Beach into the Top 5 on the Billboard Country Airplay, Mediabase and Country Digital Songs charts, making it the fastest rising single of Bentleys career. The relationship rebound track also notched the No. One spot on Billboards Hot Country Songs chart.

The country superstar will set sail on his 2016 SOMEWHERE ON A BEACH TOUR with Randy Houser, Cam and Tucker Beathard beginning May 12 in Holmdel, NJ. For more information on the new album, upcoming appearances and tour dates, stay tuned to www.dierks.com.