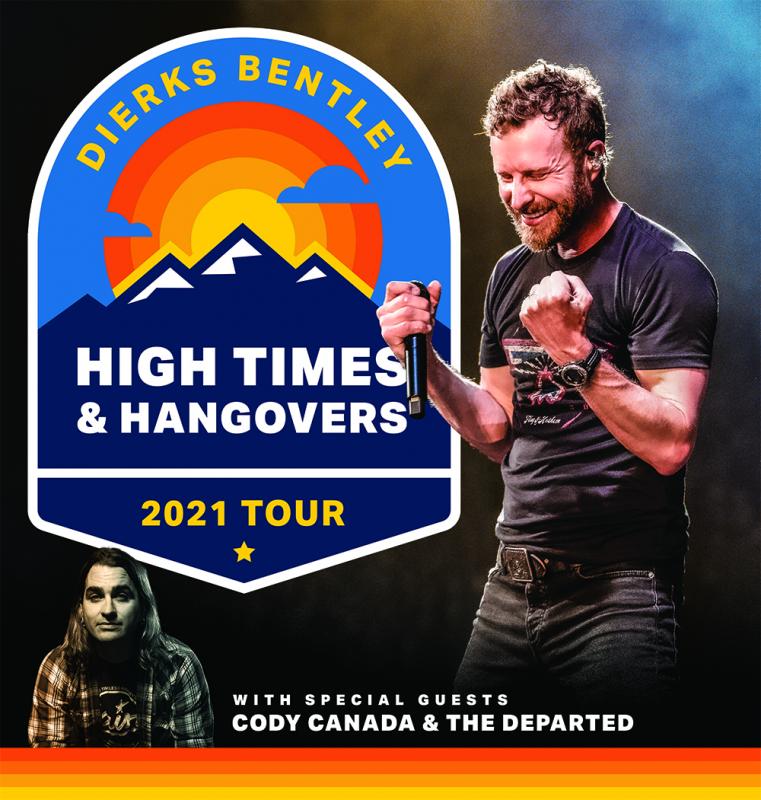 Multi-Platinum singer/songwriter Dierks Bentley is bringing back the HIGH TIMES & HANGOVERS club tour with five shows in five nights, kicking off on May 11. The last time Bentley headlined a dive bar tour by the same name was 2006, also with special guest Cody Canada & The Departed (Cross Canadian Ragweed). Pre-sale for fan club members begins tomorrow (4/27 @ 10:00A Local Time), before tickets go on sale to the public Friday (4/30 @ 10:00A Local Time) at www.dierks.com.   HIGH TIMES & HANGOVERS TOUR DATES: 5/11/21    Isle of Palms SC - Windjammer  5/12/21    Greenville, SC - Blindhorse Saloon 5/13/21    Charlotte, NC - Coyote Joe’s  5/14/21    Gainesville, FL - Knockin Boots 5/15/21    Knoxville, TN - Cotton Eyed Joe   His rowdy HIGH TIMES & HANGOVERS club shows will highlight Bentley's 19 No. One hits with impromptu crowd-favorites. As CMT about the first run, "fans got a close-up look at what makes Bentley one of the most roadworthy country artists” and they will be reminded of how that has not changed over a decade later. Each date will be in compliance with CDC regulations based in each market.   Bentley continues to be a dominant voice for the genre with over 6.4 billion streams. Reaching a new creative high while “making music designed to challenge” (New York Times), Bentley co-wrote 10 of 13 tracks on his last album THE MOUNTAIN, which earned him the highest debut sales of his career and became his seventh chart-topping release. Following his 19th No. One hit at Country radio, he continues to climb the chart with his current Top 20 single “Gone.” Bentley has amassed countless nominations from the ACMs, CMAs, Billboard Music Awards and more while also earning 14 GRAMMY  nominations. He just recently celebrated his 15 year anniversary as a member of the Grand Ole Opry. As “he is dedicated to giving fans the best performance possible" (The Tennesseean) as a headliner for national festivals and during his own headlining run, Bentley has also created professional endeavors outside of the music with his Flag & Anthem lifestyle collection, Desert Son, along with his “Dierks Bentley’s Whiskey Row” franchise hosting five locations. For more information visit www.dierks.com.